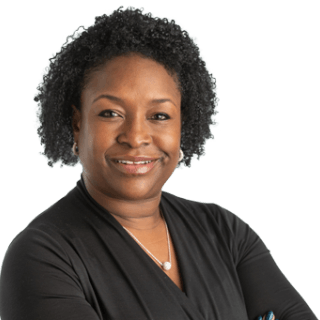 Professor Dana A. Thompson, '99, is a clinical professor of law and directs Michigan Law's Transactional Law Clinics Program, the Community Enterprise Clinic, and the Zell Entrepreneurship Clinic. She has devoted most of her legal career to representing community-based organizations and small businesses on transactional matters to advance economic, racial, and social justice in urban communities.

Professor Thompson teaches in the Community Enterprise Clinic, where she represents community-based and nonprofit organizations, cooperatives, social enterprises, and small businesses in Detroit and other disinvested urban communities. She is the founding director of Michigan Law's Zell Entrepreneurship Clinic, where she represented University of Michigan student-led startups and other start-up ventures.

Her scholarship and other writings focus on urban entrepreneurship and community development, small business legal matters, and student entrepreneurship. Prior to entering academia, Professor Thompson practiced at Morrison & Foerster LLP in San Francisco, then at Miller, Starr and Regalia, where she specialized in commercial real estate and corporate law. She then joined the Nature Conservancy as regional counsel.

In November 2014, Professor Thompson was elected statewide by the citizens of Michigan to serve on the Wayne State University Board of Governors, which elects the president of the university, has general supervision of the university, and controls all expenditures from university funds, among other duties. Professor Thompson also serves on the board of directors of TechTown Detroit and Voters Not Politicians. She is the past chair of the Community Economic Development Committee of the ABA's Business Law Section and is a past co-chair of the Legal Educator's Committee of the ABA's Forum on Affordable Housing and Community Development Law. She also is a past co-chair of the Association of American Law School's Clinical Law Section's Awards Committee.

"Lawyers as Social Engineers: How Lawyers Should Use Their Social Capital to Achieve Economic Justice"
Michigan Journal of Race and Law
"Caring for the Souls of Our Students: The Evolution of a Community Economic Development Clinic During Turbulent Times"
Clinical Law Review
"Accelerating the Growth of the Next Generation of Innovators"
Ohio State Entrepreneurial Business Law Journal
"L3CS: An Innovative Choice for Urban Entrepreneurs and Urban Revitalization"
American University Business Law Review
END_OF_DOCUMENT_TOKEN_TO_BE_REPLACED

Gave the keynote speech about the unequal access to capital and other resources for businesses owned by women and people of color, Duke University's Samuel DuBois Cook Center on Social Equity's Capital Matters conference.

Presented during the panel session, "Collaborating for Innovation: Cooperative Approaches to Supporting the IP and Business-Law Needs of Entrepreneurs," Midwest Conference on Clinical Legal Education," University of Michigan Law School.