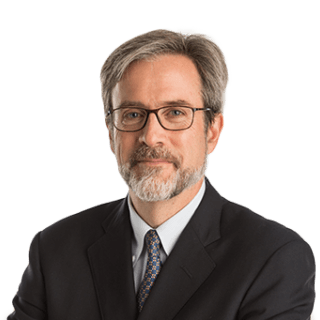 Professor Nicholas Calcina Howson, the Pao Li Tsiang Professor of Law, is a former partner of Paul, Weiss, Rifkind, Wharton & Garrison LLP who worked out of the firm's New York, Paris, London, and Beijing offices, and as a managing partner of the firm's Asia Practice based in the Chinese capital.

Howson has spent many years living in the People's Republic of China (PRC), both as a scholar and as a practicing lawyer based in Beijing. Howson writes and lectures widely on Chinese law topics, focusing on Chinese corporate law and securities regulation, the Chinese capital markets, Chinese legal history, and the development of constitutionalism in Greater China. Howson has been a consultant to the Ford Foundation, the United Nations Development Programme, the Asian Development Bank, the Chinese Academy of Social Sciences, and the Chinese legislature and various PRC government ministries and administrative departments in connection with the drafting of PRC statutes and regulations. He acts as a Chinese law expert or party advocate in U.S. and international litigation and/or U.S. government enforcement actions. In addition to Michigan Law, he also has visited and taught at the Berkeley (Boalt), Columbia, Cornell, and Harvard law schools. Howson is a member of the Council on Foreign Relations in New York City, and a designated foreign arbitrator for both the China International Economic and Trade Arbitration Commission in Beijing and the Shanghai International Economic and Trade Arbitration Commission. He is a former chair of the Asian Affairs Committee of the New York City Bar Association.

Discussant at “The Evolution and Future Prospects of US-China Relations: An Intimate Conversation with Jan Berris,” Lieberthal Rogel Center for Chinese Studies at the University of Michigan, Ann Arbor, Michigan.

Panelist Presentation on “The Implications for the Protection of Civil and Political Rights in the Hong Kong SAR Arising from Security Legislation for the Hong Kong SAR Made by the National People’s Congress Standing Committee in Beijing” for the Webinar “China’s Proposed National Security Law and Hong Kong – What’s Happening Now?”, Lieberthal Rogel Center for Chinese Studies at the University of Michigan, Ann Arbor, Michigan.

Presented the paper, "The Private Right of Action in China's Legal System—Citizen and Legal Autonomy in the Balance," at the conference "China's Legal Construction Program at 40 Years—Towards an Autonomous Legal System?" convened by Michigan Law and the Lieberthal Rogel Center for Chinese Studies at the University of Michigan, Ann Arbor.

Presented the paper, "Private Enforcement of Corporate Law and Securities Regulation Claims in the People's Republic of China—Promise and Peril," at the Research Handbook on Comparative Corporate Governance Workshop, Fordham University School of Law, New York.

Taught a short course on U.S. Securities Exchange Act of 1934 Rule 10b-5 and Class Action Litigation at the East China University of Politics and Law, Shanghai.

Taught a short course on current issues in U.S. Securities Exchange Act of 1934 Rule 10b-5 Litigation at the University of Tokyo, Japan

Presented the paper, "Rule-maker as Rule-breaker—Illegal Enforcement of the Insider Trading Prohibition by China's Securities Regulator and Amendment of the 2006 PRC Securities Law," at the University of Tokyo, Japan.

Commentator on "The Clashes of Capitalism—Chinese Companies in the U.S." by Professor Li Ji (Rutgers Law School) at an Asia Law Society presentation, University of Michigan Law School.

Panelist at a roundtable on "The Uyghur Human Rights Crisis: What is Happening in Northwest China?" presented by the Lieberthal Rogel Center for Chinese Studies, Global Islamic Studies Center, and the Donia Human Rights Center, University of Michigan.

Presented the article "China's 'Corporatization without Privatization' and the Late 19th Century Roots of a Stubborn Path Dependency" at the Zhejiang University "International Prominent Persons Forum on Rule of Law and Reform," Hangzhou, Zhejiang Province, China.

Presented "After Newman—The Law of Insider Trading in the United States and What It Means for China's Developing Securities Law" at the Zhejiang University Guanghua School of Law, Hangzhou, Zhejiang Province, China.

Re-appointed associate director of the Lieberthal Rogel Center for Chinese Studies at the University of Michigan.

Presented "After the Fall—Rewriting China's Securities Law and Possibilities for 'Rule of Law' Capital Markets in the PRC" to the American Chamber of Commerce in China's Financial Services Forum, Beijing, China, and Morrison & Foerster LLP Hong Kong SAR, China.

Reappointed as an arbitrator-mediator for the Shanghai International Economic and Trade Arbitration Commission (SHIAC).