Imagine a scene where two kids are walking home from school. They're talking, joking, and moseying along when a police officer approaches them. The officer sees one of the kids admiring his friend’s toy. Before long, he’s being photographed and the officer is taking his fingerprints. He hasn't been charged with a crime.

This describes a 2012 incident that took place in Grand Rapids, Michigan, between Keyon Harrison, a Black 16-year-old, and Police Captain Curtis VanderKooi. VanderKooi stopped Harrison after VanderKooi saw Harrison hand another youth a large model fire engine. The police officer believed that Harrison had stolen the toy, but he was simply carrying it for a friend who was riding a bike.

A similar incident occurred in 2011 when Denishio Johnson, also Black and 15 years old at the time, was walking through an athletic club parking lot. VanderKooi and Officer Elliot Bargas stopped, photographed, and fingerprinted Johnson. In both cases, the department justified their actions because the teens were not carrying identification.

A discriminatory practice leads to six years of legal wrangling

According to the American Civil Liberties Union (ACLU) of Michigan, which ultimately represented both Harrison and Johnson in Johnson v. VanderKooi, the Grand Rapids Police Department used this “photograph and print” policy for more than three decades to disproportionately target thousands of Black residents.

Reports show that 75 percent of the people whom the police stopped and subjected to the policy were Black, while 15 percent were white. The plaintiffs sued to end the practice.

Michael Steinberg, a professor from practice at Michigan Law who in 2016 was the legal director for the ACLU of Michigan, asked two Michigan Law professors to serve as cooperating attorneys on the case.

Ted Becker and Margaret Hannon, who respectively serve as director and clinical professor in the Legal Practice Program, signed on initially to co-author an amicus brief. They did not expect that the case would take more than six years to resolve and dredge up an assortment of legal quandaries.

Arguing the unconstitutionality of “photograph and print”

After Becker and Hannon joined, the case went to the Michigan Court of Appeals, which issued a decision holding that the City of Grand Rapids could not be held liable because its policy only allowed, but did not require, the police to take photographs and fingerprints. This decision would make it much harder to hold municipalities accountable for civil rights violations in state court.

“We were arguing Fourth Amendment issues as amicus. Although we lost at the Court of Appeals, we decided to take an appeal to the Michigan Supreme Court, which granted the request,” said Becker.

“They wanted to address one particular municipal liability issue: whether the City of Grand Rapids could be sued for civil rights claims like this, and if their fingerprint and photograph procedures were an official policy.”

Hannon argued the case in front of the Michigan Supreme Court in 2018 and won a unanimous reversal of the decision.

“The Court of Appeals had ruled that the ‘photograph and print’ policy essentially said that when a police officer stops someone who doesn't have identification, they may take their fingerprint and photograph to verify their identity, but it didn’t say they had to do this. Which meant that the city couldn’t be held liable for the officer's choice of whether to do it or not,” she said.

“We thought this was a really dangerous reading of the law—that a municipality can authorize officers to do something, give them the choice of whether to do it or not, give them the equipment and the procedure or the process for doing it, but then not actually be held accountable if that violates someone’s constitutional rights.”

Although they won on this point, the case was sent to the lower court once more to decide if this policy was actually unconstitutional. Along with their co-counsel, Becker and Hannon submitted briefs to the Court of Appeals arguing that when the officer takes someone’s thumb and physically presses it down on a pad of paper, it’s a Fourth Amendment search because it’s a trespass to the body. They also argued that the search was unreasonable.

However, the Court of Appeals concluded in 2019 that there was not a Fourth Amendment violation, and the ACLU again appealed to the Michigan Supreme Court.

Applying trespass theory to the body, not just physical property

By the time the case was argued once more in November 2021, Becker, Hannon, and other ACLU attorneys had collaborated with Professor David Moran, co-director of the Michigan Innocence Clinic, to fine-tune their position. The case also had garnered attention and support from a range of organizations that all submitted amicus briefs, including the Cato Institute, the Mackinac Center for Public Policy, the Innocence Network, and the NAACP’s Legal Defense and Education Fund.

In a unanimous decision, the Court held in July 2022 that the photograph and print policy did constitute an unreasonable search, adopting the trespass theory.

“In Michigan, there's no obligation to identify yourself in a particular way, there’s no state law that requires someone to have an ID. So once someone identifies themselves, that is sufficient,” said Hannon.

“The reasons that the plaintiffs had been stopped had really nothing to do with their identity, and the police didn't have any reason to believe that they were lying about who they said that they were. I think it's the first case explicitly saying that fingerprinting at the stop before an arrest is a search under the Fourth Amendment.”

“It was also the first case to explicitly declare that the Fourth Amendment concept of trespass could apply to the body, not just physical property,” added Becker. “None of this was theoretical or hypothetical. It was real, and it mattered.”

Although the case currently sits with a lower court to settle whether Harrison gave consent to be fingerprinted and photographed, having this policy declared unconstitutional is a win for civil rights advocates—and for every person who was subjected to an unjust stop and search.

“I think it matters on a bigger scale, but it’s important even if it only matters to these two kids who were initially stopped to see that there are people willing to fight for them and to say that there should be repercussions for what happened,” Hannon said.

“It’s crucial that we are out there doing what we say is important when we’re teaching students how to lawyer.” 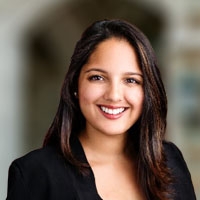