In a recent talk co-sponsored by Michigan Law and the Ford School of Public Policy, American Bar Association President Reginald Turner, ’87, spoke to students about his role at the ABA and the two words that have underpinned his approach to the law: Do justice.

Turner credits a chance meeting during his law school days with Dennis Archer—who at the time was president of the State Bar of Michigan, and would go on to serve as a justice on the Michigan Supreme Court and as the mayor of Detroit—as a critical turning point that gave him purpose and direction in his career.

As president of the Law School Student Senate, Turner introduced Archer during an event in the Law Quad, and was impressed by his gravitas and his commitment to diversity and equity in the profession. The meeting led to a decades-long mentorship that continues to this day.

“Thanks to the guidance of Dennis Archer and all my mentors, along with the incredible education I received, I have strived throughout my career and service to do justice,” Turner told the audience. “It is my hope—and my expectation—for every student here to do justice with your education at the University of Michigan.”

In 2003, 60 years after the ABA accepted its first Black member, Archer was elected by the ABA House of Delegates as the first Black president of the organization. Turner is the fourth person of color to lead the ABA, and he noted the strides it has made towards diversity and inclusion in recent years. He is particularly passionate about the ABA’s efforts to expand the Legal Opportunity Scholarship Fund to ensure that students from all backgrounds are able to attain a legal education.

Turner, who is a member of the Detroit office of the international law firm Clark Hill PLC, has long been focused on issues related to access to education. He was appointed to the Michigan State Board of Education and won election for a full term in 2006.

Earlier, he was part of a group of pro bono lawyers who aided the University of Michigan in two landmark Supreme Court cases related to diversity in its student body.

“The cases of Grutter v. Bollinger and Gratz v. Bollinger confronted our nation with critical questions of justice and equality. As always, lawyers played a pivotal role in the struggle,” he said. “The opinions reinforced the value of diversity as a central justification for the consideration of race in admissions.” 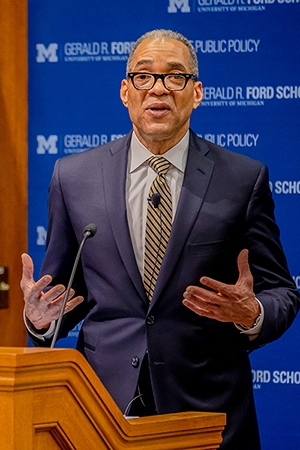 Turner said that improvements in diversity have ripple effects beyond the students themselves, by raising a new generation of lawyers who are conscious of the need for reform of the criminal justice system to “reduce bias and inadequacies” that often disproportionately impact poorer communities of color.

Turner also has a longstanding penchant for public service, having served as a White House Fellow and as an aide in the Department of Housing and Urban Development during the Clinton administration.

He told the audience that he was shaped by his experience as a student-attorney in the Landlord-Tenant Clinic, where he worked on tenant and housing cases for people who couldn’t afford a lawyer. He lauded the benefits of pursuing pro bono work during law school.

“That feeling of helping people remain in their homes and making a positive impact on my community was the foundation for my career in law and path to lifetime volunteerism,” he said.

In closing, Turner encouraged law and public policy students to use their education for the betterment of their communities and society at large, noting the intersection between the two disciplines.

“It has been my privilege and good fortune to participate in volunteerism and leadership that has drawn on both spheres, separately and as a unified whole, to do justice,” Turner said. “No matter what you do in your life’s work, my hope is that in each and every moment you see your own mission in two simple words: Do justice.”