Every year at about this time, the Admissions Office sends out an email to a portion of our pool. The intention of the email is to shine a little light on our process and bring a little transparency to the proceedings. In the main, it’s our impression that the email accomplishes this. But every year, my best drafting intentions notwithstanding, I am distressed to discover that for at least some portion of the recipients, I have succeeded only in sending them into a tizzy. The sound you hear is my beating my head on my desk, despairing of ever getting this email exactly right.

Here’s the history. A thousand or so years ago, I began working in admissions in the midst of a chaotic season that involved multiple staff maternity leaves, not to mention the Grutter trial, which demanded enormous amounts of my predecessor’s time and attention. As a result of these considerable distractions, applicants that year did not get decisions in the timely fashion they reasonably and naturally expected. That spring, I concluded, after the 10,000th or so telephone call/email asking “Where’s my decision?!?,” that being transparent about the admissions process timeline would be a huge kindness to the applicant pool, and not incidentally might save a lot of time on the part of admissions staff.

So the next year, and for every year following, I sent an email to everyone who had applied relatively early in the season, so that their file had already had at least one round of review by file readers, but for whom, for any one of a number of possible reasons, we had not yet reached a decision. The email says, in essence, thank you for your patience; we are sorry we haven’t yet sent you a decision; we are attempting to strike a balance between making decisions as quickly as possible with making the best decisions we can.

The message seems so straightforward to me, but based on the subsequent emails and calls we get, I am slowly coming to terms with the possibility that this one email’s attempt to shed a little light can’t compete with the overall murkiness of the admissions process.

Tenacity is my foremost virtue, though, so of course my solution to the communication gap is to follow up the email with a blog post! Here is a list of things that the email does NOT mean for a recipient:

1. You are definitely going to be waitlisted. Some people who receive the email ultimately will be waitlisted; others will be admitted; others will be denied. The people receiving the email all have in common two things: they applied before a particular date (which changes every year, depending on how quickly we get applications processed), and as of the morning we send the email, they have not gotten, or been slated for, a final decision. (In fact, about 20 people who got the email this year were admitted by the end of the day.)

2. You are “on hold.” I don’t actually know for sure what this means, because we don’t use that terminology at Michigan, but apparently other law schools do. As I understand it, being on hold means that your file has been read and then set aside, to be revisited at some later date. That is in essence true for some people receiving our email—although not for everyone. But in any case, it’s not a formal status; the “later date” might be later this week, or in two weeks, or three weeks, or every week for the next five weeks. It’s unpredictable.

3. You are a lesser and inadequate candidate whom we don’t really like. Definitely not the case. The majority of the people getting this email fall into one of two categories: someone about whom the file readers had different impressions, or someone about whom I just couldn’t reach a decision. Neither means there’s anything wrong with the applicant. For the first instance, frankly, sometimes one of the readers just misunderstood something. And for the second, equally frankly, sometimes I just get to the end of a reading day and stop trusting my judgment. Everyone looks great, or everyone looks not great. When that happens, I know it’s time to stop reading and try again later. Often, when I come back, I am baffled by the source of my initial indecision.

4. We are yield-protecting, and if you don’t send us some responsive rear-end-smooching communication, we’re going to deny you. In the email, I write that it ought not to be interpreted as a veiled coercive hint for additional information. I mean that. If you want to give us additional information, we will happily take a look at it, and depending on what it is, it might help. But we will certainly admit some people who send nothing, and we will not admit others who send something. “Yield protection” is a complicated topic, but it is one that has nothing to do with this email.

Bottom-line, making these decisions is complicated, and we can’t always make them quickly. We appreciate your patience as we do our best. And in the meantime, chill lemur sez: 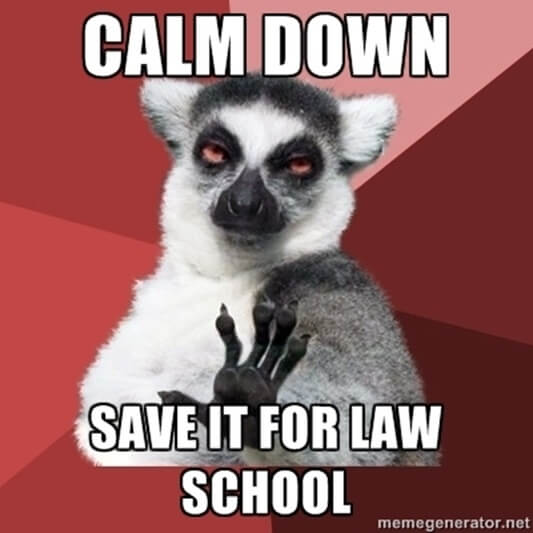