Knight, a clinical assistant professor of law, is more than happy to share the backstories.

The first harkens back to his days as a law clerk for the Hon. Gershwin Drain on the U.S. District Court for the Eastern District of Michigan, when the court heard a lawsuit to block a Michigan law that eliminated straight-ticket voting, arguing that it violated the Voting Rights Act.

We all had our whole heart in that fight. There were moments when our plaintiffs testified and there wasn’t a single dry eye in the courtroom. Everyone was giving 120 percent because real people were in danger.

The U.S. Court of Appeals for the Sixth Circuit later affirmed the decision on appeal, thus preserving straight-ticket voting for the 2016 election.

“It was a high-pressure case in a contentious election year, concerning an issue that I was passionate about,” said Knight, who wrote the draft opinion for the court and then commemorated it by tattooing the case citation on his upper arm.

Challenging the Trump administration on behalf of Haitian refugees

The second tattoo stems from a case with an even brighter spotlight.

“I had been at Mayer Brown for a few months,” he said, referring to the international law firm, based in Chicago, where Knight served as a litigation associate for the past four years. “A coworker asked if I was up for being part of a trial team. I said, ‘Yeah…?’ Then he asked if I was okay with going up against the Trump administration, and I said, ‘Hell, yeah!’”

The firm was part of a team representing the plaintiff in Saget v. Trump, which challenged the administration’s decision to end Temporary Protected Status for more than 50,000 immigrants from Haiti. The decision would have required the immigrants to return to Haiti, which was still dealing with the fallout from the devastating earthquake that rocked the country in 2010.

The plaintiffs argued that the administration’s decision violated the Haitians’ right to due process because it was motivated by racial animus, and violated the Administrative Procedures Act.

In November 2018, a federal court denied the defendant’s motion to dismiss, and suddenly the parties had a trial date: January 3, 2019.

It was less than six weeks away.

“Normally you’d get six months to do discovery for a trial. So it was intense,” Knight said.

“We had to prep expert witnesses, do depositions and rehearse, and then on New Year’s Day flew to Brooklyn and a couple of days later were in trial—against very good attorneys for the government. We all had our whole heart in that fight. There were moments when our plaintiffs testified and there wasn’t a single dry eye in the courtroom. Everyone was giving 120 percent because real people were in danger.”

Knight and his colleagues returned to Chicago knowing they had done everything they could.

That April, they learned that the court had decided in their favor. 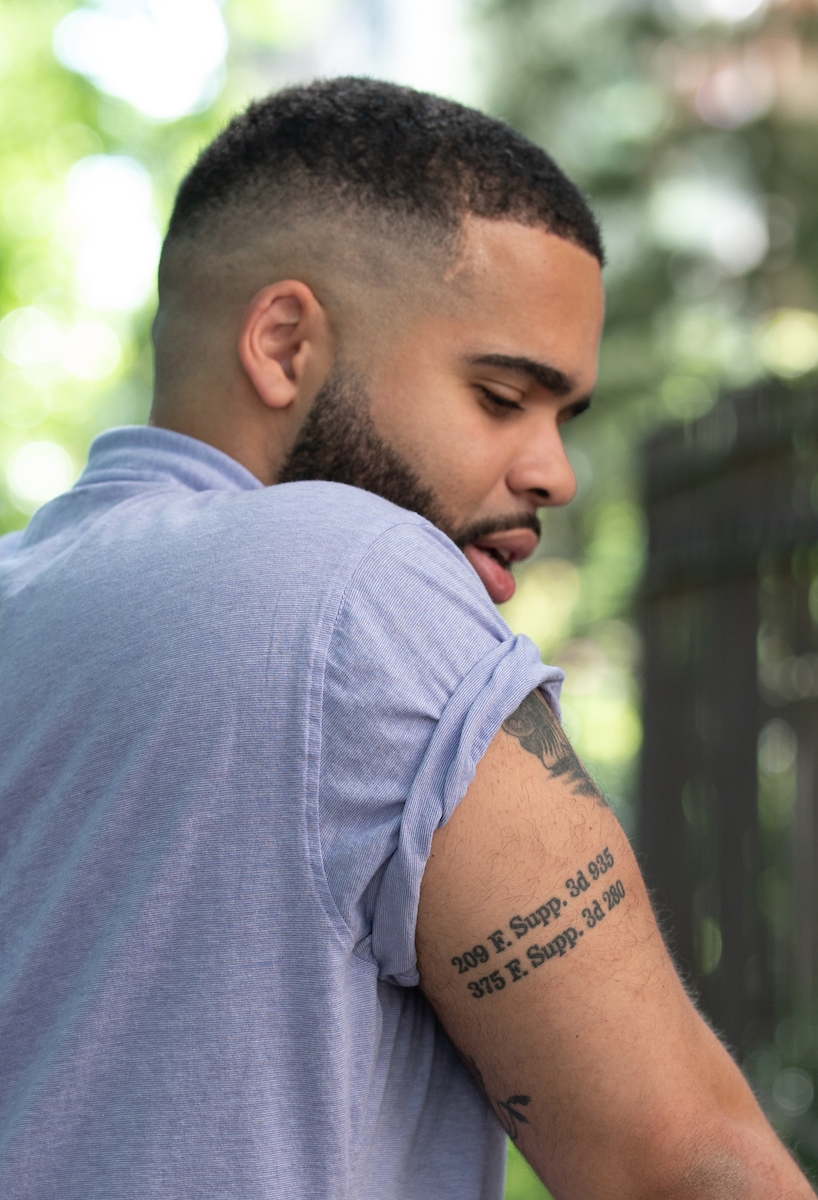 Knight, moved and gratified, marked the occasion by getting the citation tattooed on his arm. Like the first tattoo, it would serve as a reminder not only of an important experience for a young lawyer but also of the power of litigation to fight injustice and make a difference in the lives of vulnerable people.

He got the tattoos near the top of his arm, so he has plenty of space to add more citations in the future.

Working within BigLaw to promote equity and social justice

“When I was in law school, I knew I wanted to do something public service-oriented,” said Knight. It’s a value that runs in his family—his mother earned a PhD from U-M’s School of Social Work—and one that in 2020 inspired him to help create a program in Mayer Brown’s Chicago office called Project Equity.

Through it, Knight and his colleagues worked with Chicago Legal Aid to help protect low-income people from eviction. They took on a voting rights case in North Carolina. And they volunteered in public schools, teaching students about their constitutional rights.

“It’s essentially Street Law, which I’ve been doing in some capacity since I was a law student,” Knight said, referring to the approach in which law students and young lawyers provide legal and civics education lessons to high school students, especially those from underserved communities. “It’s something I’m pretty passionate about.”

Over time, Knight has realized that while litigation can be both exciting and fulfilling, teaching is his primary passion. So when an opportunity arose at Michigan Law, he pursued it with vigor.

Before moving to Chicago, he spent time in Detroit teaching police cadets about constitutional law and the limits of police powers. He enjoyed mentoring junior and summer associates in written and oral advocacy. And today he’s excited about working with first-year students at Michigan Law.

“That’s probably what I’m looking forward to most: meeting the students and helping them through what can be a pretty scary year,” Knight said.

And if they happen to see the citations tattooed on his arm, he’s also looking forward to sharing what they mean to him, and about how the students, too, can use their knowledge of the law to help people out of desperate circumstances and further the broader cause of social justice.