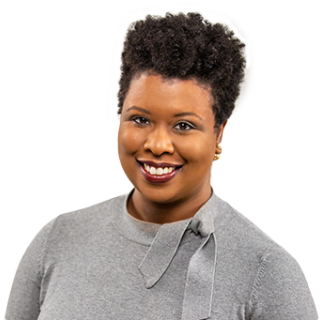 Burton-Harris is a native of Flint and a graduate of Flint Southwestern Academy. She earned a B.A. in Political Science and African American Studies from the University of Michigan-Ann Arbor. She graduated from Wayne State University Law School in 2012. During her time at Wayne Law, Burton-Harris taught high school students at Southeastern High School and worked at the Free Legal Aid Clinic as a student advocate for underprivileged families. Passionate about the relationship between law, social justice and equality, she began preparing for a career focused on criminal law and social justice. Burton Harris served as president of the Black Law Students Association, where she encouraged students to use their legal experience to create positive change for community residents. In 2014, she opened a private firm in the heart of downtown Detroit specializing in family law and criminal defense at the state and federal trial court level. She has represented hundreds of families across Michigan in cases ranging from child custody to murder. Burton-Harris's work has been highlighted on CNN, Democracy Now, The Guardian, Essence, the New York Times, The Appeal, the Detroit Free Press, the Detroit News and local Detroit news stations FOX 2 Detroit, WDIV and WXYZ Detroit.

When Burton-Harris started her law firm, she had the vision of being a "people's lawyer," and using her law degree to be a vehicle for change. Her passion for justice and equality has led to her involvement with several grassroots organizations as a legal adviser, including We The People-Detroit, Metro Detroit Association for Cab Drivers, BYP-100 and New Era Detroit. She has served on the Legal Services Advisory Committee for HAVEN of Oakland County, developing trauma-informed training criteria and procedures for attorneys handling domestic violence cases. She has also served on the New Lawyers Advisory Board for the Institute of Continuing Legal Education, where she has also presented at conferences and seminars. Burton-Harris currently sits on the Coalition for Police Transparency & Accountability, National Conference of Black Lawyers, the Board of Directors for the National Lawyers Guild Michigan chapter and the Board of Directors for Covenant House Michigan, a youth homeless shelter where she developed a mentoring program for residents.

Burton-Harris understands the nexus between youth development and criminal justice reform. She has written op-ed articles on criminal justice reform and the intersectionality of criminal justice and poverty. She believes that the core of reform is investment in community and that investment in community is divestment from the criminal justice system. Burton-Harris has spent her career working for children and families, defending them against the brutal system of mass incarceration. Throughout her professional career she has used the law to help members of the most vulnerable communities, and her experiences advocating on behalf of her clients have helped her identify some of the worst inequities of our criminal justice system. It is a system that criminalizes poverty, mental health issues, and substance use disorders.

Burton-Harris takes a holistic approach to her work, helping people build stability in their lives that reaches beyond a courtroom. She has worked with community partners to assist her clients in maintaining stable housing and jobs, as well as accessing community resources for mental health and substance abuse. She can easily be found in the community facilitating community-based Know Your Rights training sessions and volunteering at expungement fairs.

After years of witnessing over-charging, requests for excessive bail, and prosecutorial vindictiveness, Burton-Harris realized that her efforts to end mass incarceration as a "people's lawyer" would never be sufficient. Effective change would require a transformation of the gatekeeper to the criminal justice system: the county prosecutor. She believes a progressive prosecutor is one who believes in fair and equal justice for all; a prosecutor who will establish practices that promote the goals of individualized justice without producing unfair disparities among similarly situated defendants and victims of crime; a prosecutor who is transparent and accountable to the people.

Burton-Harris lives with her husband Robert, their three-year-old son, and their dog, Sasha.