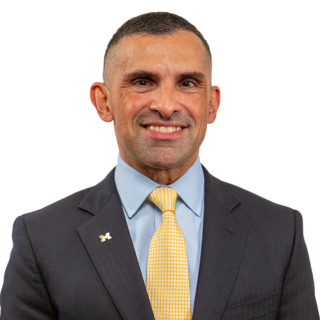 Hamid M. Khan, ’02, is a lecturer of Islamic law at the University of Michigan Law School. He also is a senior policy advisor at the Office of Refugee Resettlement within the U.S. Department of Health and Human Services (HHS), a consultant with the American Bar Association’s Rule of Law Initiative advancing women’s marital rights in Pakistan, and a National Security Fellow with the Truman National Security Project.

Before his current tenure at HHS, Professor Khan served in various roles, including at the Federal Judicial Center, the United States Judiciary’s research and education agency, as deputy director of the Rule of Law Collaborative. He also was a nonresident senior fellow with the King Faisal Center for Research and Islamic Studies and senior rule of law program officer at the United States Institute of Peace. He has taught at the University of South Carolina, George Washington University School of Law, the University of Colorado Law School, the University of Wyoming, and Ohio Northern University. In addition, he was a postdoctoral fellow with Stanford University Law School’s Afghanistan Legal Education Project.

Professor Khan’s substantive work in international legal development has delved into issues of Islamic law and its intersection with customary, constitutional, gender, and post-conflict justice. As a result, he has consulted on justice sector and development issues with a wide variety of international organizations, nongovernmental organizations, corporations, and the U.S. government. His advisees include the director of national intelligence, the U.S. Department of Defense, the U.S. Department of State, the U.S. Agency for International Development, the federal judiciary, the United Nations, NATO, and the U.S.-Islamic World Forum at the Brookings Institution.

Among his other credentials, Professor Khan served as counsel of record for five detainees held at the U.S. Navy facility at Guantanamo Bay, Cuba, and was an assistant U.S. attorney for the District of Colorado. He also worked in both houses of Congress, the British House of Commons, and the U.S. Commission on Civil Rights.