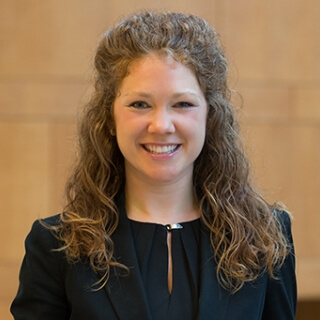 Emily is a double wolverine, receiving her JD, cum laude, in 2011. She spent her time in law school exploring various government and public interest positions, and dedicated her time in practice to public service. Before coming to the Office of Career Planning in 2020, Emily worked for over five years in the Civil Division of the U.S. Attorney's Office for the Southern District of New York, where she handled both affirmative and defensive cases in the areas of civil rights, frauds, environmental matters, torts, bankruptcy, tax, FOIA, employment law, constitutional law, and administrative law. During her time in the SDNY, Emily was involved in attorney hiring and coordinated the summer internship program. Prior to working at the U.S. Attorney’s Office, Emily clerked for Magistrate Judge James Cott, in the Southern District of New York, and also for Judge Rosemary Collyer, in the D.C. District Court. While at Michigan Law, Emily interned at the Washtenaw County Public Defender's Office and spent her 1L summer in Tanzania working for the judicial branch of the UN's International Criminal Tribunal for Rwanda (which heard cases against those accused of perpetrating the Rwandan genocide and other international war crimes). She spent her 2L summer at Morrison & Foerster in New York, and also worked there following graduation. Prior to law school, Emily worked in the Appeals Bureau at the Manhattan District Attorney’s Office.