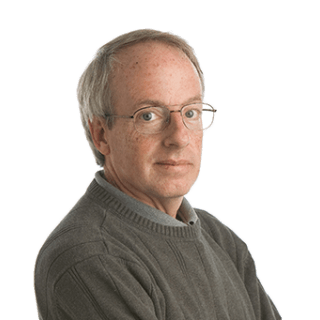 Professor David Moran, ’91, co-founded the Michigan Innocence Clinic in January 2009 to litigate claims of actual innocence by prisoners in cases where DNA evidence is not available.

In its first nine years, the clinic’s work resulted in the exoneration of 15 men and three women who have served a total of more than 250 years of wrongful incarceration. In addition to his work in the clinic, Professor Moran teaches courses in Criminal Law and Criminal Procedure. He has published many articles about various aspects of criminal procedure, especially search and seizure. He has argued six times before the U.S. Supreme Court, most recently in November 2012. Among his most notable cases is Halbert v. Michigan, in which the Supreme Court struck down a Michigan law that denied appellate counsel to assist indigent criminal defendants who wished to challenge their sentences after pleading guilty. He served for eight years as an assistant defender at the State Appellate Defender Office in Detroit. Prior to joining Michigan Law in 2008, he was an associate professor and the associate dean for academic affairs at Wayne State University Law School. Moran was named “Upperclass Professor of the Year” each of the eight years he taught at Wayne State. In 2010, he was named the Michigan Lawyer of the Year by Michigan Lawyer’s Weekly. In 2016, he was named a Michiganian of the Year by The Detroit News for his efforts in exonerating a Michigan Innocence Clinic client.

Re-elected to a three-year term on the executive board of the Innocence Network.

Co-taught a workshop on federal habeas corpus at the 2018 Innocence Network Conference.

Member of the University of Michigan's Rhodes-Marshall Scholarships Nominating Committee.