Thanks to the genius inspiration this spring of a couple of colleagues at a few law schools around the country, Tuesday night saw the debut of a new admissions event in Washington, D.C. Fourteen of us, representing institutions that we think have a great deal to offer and a great deal in common, set up shop at the end of the workday in a giant room at the National Press Club. Guided by the inimitable Dean Kleinrock of NYU, four of my counterparts (from Chicago, Harvard, Penn, and Virginia) kicked things off by addressing both a wide range of topics that we’d come up with based on the group’s considerable breadth of experience talking to prospective students, along with actual questions submitted in advance by attendees. The subjects ran the gamut from the broadest possible—say, the value of a law school education—to minutiae like, from whom should you solicit a letter of recommendation, and how exactly does one go about doing that? 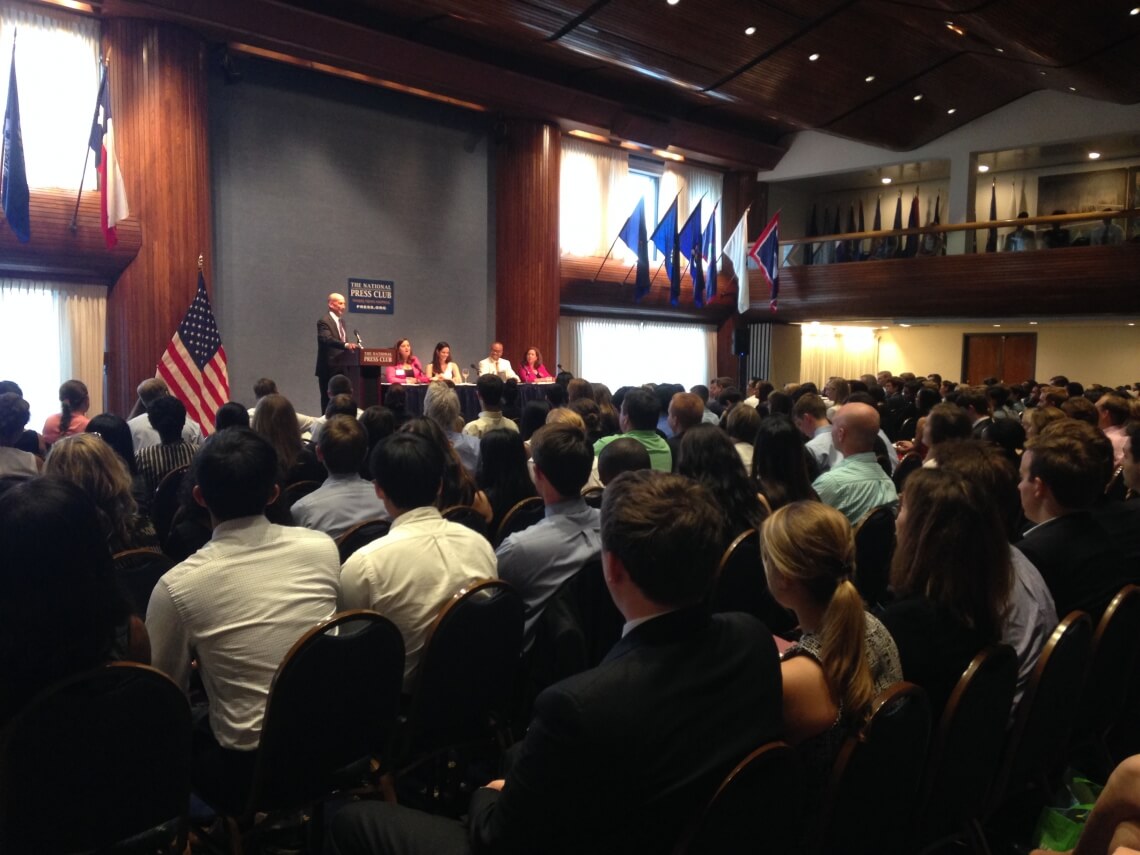 While controversy might have made things exciting, there was almost total consensus on most topics. That format is considerably less likely to lead to a reality TV contract, but given that I largely agreed with all the panelists, I found it very affirming.1 Then, after about an hour, the panel dispersed and the attendees fanned out to talk one-on-one to the individual schools at tables we had set up in traditional law school fair style.

I’ll be honest: I was a big ole doubter about the potential success of this undertaking, particularly given that it followed the LSAC forum in D.C. by only a couple of weeks. This kind of misplaced doubting is why I haven’t ever cleverly gotten in on the ground floor of, say, a company like Apple. I make up for being a late adopter, though, by evincing the zeal of the converted. Tonight we head north for a reprise at the New York City Bar Association. That event is fully subscribed and registration is closed, but we’ll be appearing in Chicago and Los Angeles in early August; for details and to register, check out the L.A.W.S. website. (Fun fact: The single most challenging organizational aspect was coming up with a name; it required considerable discussion over the course of at least two conference calls. Sadly, I cannot remember what creative force came up with the L.A.W.S. backronym, and who then shoehorned sensible words into place, but I bow to his or her imaginative exertions.) And tonight, I’ll be one of the panelists—and while I don’t anticipate any major substantive disagreements with my fellow panelists, I think it is possible that I’ll get myself into trouble all the same. (And that’s why we’ve agreed not to post audio of these events online—our aversion to bootlegs is just one way in which we as a group differ from the Grateful Dead.)

1Now that I’ve broached the possibility of an admissions-themed reality TV show, though, I’m a little distracted. Let’s contemplate that. I’m intrigued by the suggestion of Stanford’s Dean Deal of a variant of The People’s Couch, with close-ups on the faces of admissions directors while they read applications. A typical day might be something like this: