I’ve more or less recuperated from this spring’s frenzy of blog posts on career data, an endeavor that taxed my arithmetic abilities. The hiatus has enabled me to rebound just in time for the latest in law school rankings. This latest ranking struck me as a fairly clever undertaking (and others have agreed): attempting to determine the extent to which the grads of 50 law schools are living the good life, as measured by salary balanced by cost of living and law school debt. I don’t mean to suggest that assessing the good life in purely financial terms would be universally regarded as valid, or at least, not comprehensively so. But the thing about metrics is that they have to measure something, and to measure something, the something must be something that can be counted. Something like, for example, money. In any event, counting this particular set of items strikes me as pretty reasonable, and taking multiple related factors into account seemed like a decent effort at nuance.

That said, it’s worth thinking about what is and isn’t getting counted and evaluated. The one glaring flaw in this ranking is that in privileging a high salary, there is no adjustment for schools where significant numbers of people choose to go into public interest and government work, where the salaries are appreciably lower. On the one hand, that makes some sense: The biggest, highest-paying law firms are very picky about their hiring practices, and if they hire a lot of a given school’s graduates, the transitive property of something-or-other (mathematical concepts are so useful in a very fuzzy way for me) can reasonably lead one to conclude that a graduate will be equally able to attain a job at other sorts of desirable legal employers. In other words, robust (I hate that word, but it works here) law-firm employment opportunities are a decent proxy for the likelihood of many other sorts of legal employment opportunities. But on the other hand, some schools have strong public-service cultures, where people actively choose to pursue excellent public-interest and government positions, as opposed to tumbling into those jobs as an unsatisfactory Plan B. This ranking’s formulation penalizes such schools to a certain degree.

Now, I am not capable of coming up with a clever substitute algorithm that supplants this ranking with something better. But I am capable of digging up some additional data as food for thought. The ABA/LSAC Guide to Law Schools is an annual publication with enormous amounts of useful information about, among other things, career outcomes; although it’s necessarily always a bit out-of-date (the most recent 2012 edition just came out a month ago, but contains the career data for graduates in the class of 2009), it counters that failing by being super comprehensive. For the last eight years, I’ve picked and chosen bits of data from it for a bunch of our peer schools (randomly defined as the top 14 USNWR-ranked schools1), and compiled them into one large database. And now, from that, for your reading pleasure, I have culled this chart comparing the public interest and government employment data2: 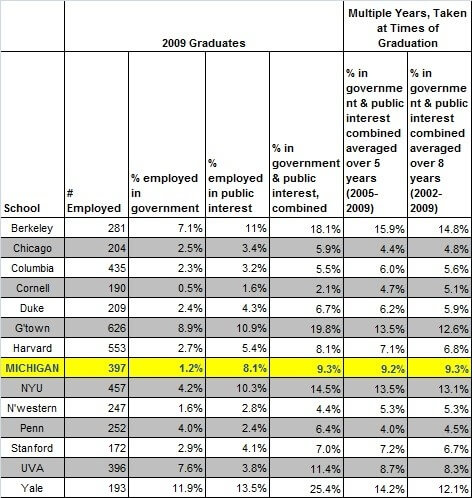 The chart shows the most recent year’s data, standing alone, as well as the five- and eight-year averages. (Five years because that’s a nice round number; eight years because that’s as far back as my database goes, and it seemed so sad not to include every possible nugget.) Looking at the most recent year’s data, you can see that Michigan is at the high end of the middle: Five schools produced a higher percentage3 of public interest and government folks in 2009, while eight produced a smaller percentage. The average data, in the aggregate, has roughly the same outcome: Four schools have higher percentages than Michigan over the last five and eight years, and nine have produced lower4.

Now, as I said, I don’t have any suggestion for a modification to the ranking formula that would normalize for public interest and government employment. But within the context of a bunch of schools that attract a lot of well-paying private-sector employers, it might be worth accounting for the fact that some of them produce larger number of graduates who choose lower-paying jobs. You can give those schools, perhaps, a soupçon of extra credit in the ranking if you’re so inclined. Or not.

One aspect of this data that I found intriguing is the biggish differences at some schools between the most recent data and the average data. Georgetown and Yale have increased the number they send to public interest and government by a considerable amount; UVA and Berkeley have increased that number by a smaller but still significant amount; and Cornell has decreased the number heading off to those employers. I’m not sure why that would have occurred; if the most recent data included the classes of 2010 and/or 2011, you might make a case that this was an impact of the recession and the resulting constriction in private-sector legal-employment hiring. Whatever the explanation, the fact that some schools show a remarkably consistent pattern of employment, as well as the fact that some schools show changing patterns, is worth noting when you’re assessing career prospects—looking at one year of data alone can be misleading.

1I am full of guilt about the fact that the chart below does not contain the data for Texas, the school that this year magically expanded the top-14 schools to be 15 schools strong, because that makes it look like I’m snubbing Texas—which would be particularly perfidious, given that Texas scored at the top of this alternate ranking. So by omitting them, I look mindlessly elitist AND insecure, all at the same time. Here’s my excuse: I really wanted to include averages in the chart—and while I included Texas in my overall database this year, I just didn’t have the fortitude to post hoc go back and add in all the data for the past eight years. Don’t hate me, Texas. Hate my laziness. 2Arguably, I should have included judicial clerkship percentages in here, since those are also highly desirable, lower-paying jobs. But I didn’t, because those are typically just one-year positions, and there’s no data available about whether people tend to go off to the private, public, or non-profit sectors at the end of their clerkships. It’s my guess that the post-clerkship patterns more or less mimic a school’s immediate post-graduate data, though. 3Note that we’re talking about percentages, not actual numbers of people; schools with identical percentages but differently sized graduating classes will have different number of actual graduates going into a given field, obviously. So, UVA’s 11.4% ends up being the equivalent of Harvard’s 7.1%: about 45 people. 4The school that flipped positions is UVA; its total percentage in 2009 was larger than its average percentages for the preceding five and eight years.