I’ve been thinking a lot about women and law school lately. For one thing, tonight is the Jenny Runkles Banquet, and last week the committee that selects the annual recipients of the associated memorial scholarship met to consider the nominees. As is typical for this award, I was blown away by the strength of the pool. (Embarrassing truth: I feel very smug when I’m part of selection committees like this; inevitably, the other committee members are praising the amazingness of the students in question, and I feel about the same as I would if I had personally given birth to them all. It is not normal, I recognize, but at least it cannot fairly be said that I’m not invested in my job.) Now, the Jenny Runkles scholarship does not necessarily go to a woman; the criteria for the award are “selfless commitment to improving the Law School community and society as a whole, through devotion to public interest and diversity,” a wholly gender-neutral description. But nonetheless, the pool of nominees is typically dominated by females, and only one of the 21 recipients since the award’s inception in 2003 has been male (represent, Jay!). I’m sure one could construct a lengthy exegesis about what’s going on with that pattern, but I will decline to do so, and will instead simply observe that Jenny Runkles was herself an amazing young woman, and it is heartening to see kindred souls, of whatever gender, tread in her footsteps year after year.

But that theme of one gender winning all the goodies in a particular realm came up in a different context recently. My favorite publication for light-hearted legal gossip, the ABA e-journal (unlike me, those people really know how to write a blog, because everything is an easily digestible six sentences or so; LOVE that), ran an intriguing piece noting that “Only 31 percent of ABA-accredited law schools have female students as law review editors-in-chief,” and that “he number drops to 29 percent at U.S. News & World Report top 50 law schools.” I haven’t read the underlying study—what with it being longer than six sentences and all—so I can’t report on whether it actually looked only at law reviews per se, as opposed to all the student-run journals at a given institution. (What’s the difference?, might reasonably ask someone not steeped in the minutiae of law school hierarchies; the law review is typically the oldest student-run journal at a law school, and typically publishes more issues per year than other journals, and typically has a more selective membership application process than the other journals.)

In any event, my mental-health issues (involving inappropriate levels of competitiveness) made me want to do some digging. Where does Michigan stand? In a very good place, at least if you’re a woman, thankyouverymuch for asking. Looking at five of our journals (the Journal of Gender and Law employs a non-hierarchical structure without EICs, and our two provisional journals don’t as yet have a sufficient track record to be included) for the last five years shows that 15 of the 25 EICs were women—or 60 percent, about double the national average; the Law Review itself has had a woman at the helm 80 percent of the time. Michigan is single-handedly skewing the stats! 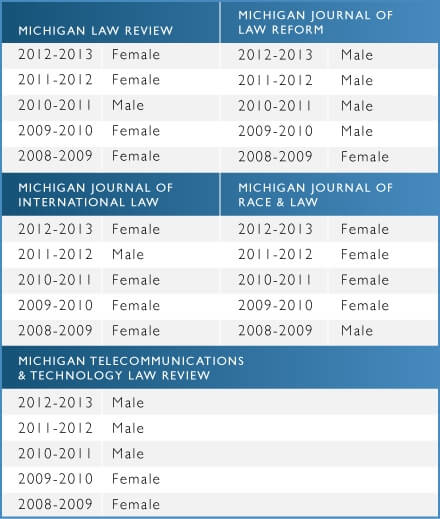 Now, what meaningful effect does this apparent dominance of women in our journals have? Hard to say. When Justice Kagan came to visit in September, I was struck by her assertion that being a woman has really made no difference in her approach to judicial decision making; maybe that’s right, maybe not. But I will say this: it was Law School ladies who were behind the organizing of the recent (second annual) sex ed trivia contest. BUT, then again—two-thirds of the hosts were men. Working together—that’s the Michigan way.