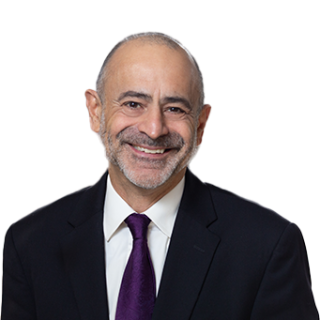 Nick Roumel is a trial lawyer with more than 30 years experience in state and federal courts. He began his career at the Free Legal Aid Clinic in Detroit, helping victims of domestic violence. From there he served the legal needs of Detroit's indigent population at Wayne County Neighborhood Legal Services, until 1989 when he moved to University of Michigan Student Legal Services for 14 years. Since then he has been exclusively in private practice.

Presently Roumel focuses on plaintiff's employment and civil rights litigation, as well as educational law matters, such as Title IX sex harassment, assault, and retaliation. He is also uniquely suited to represent students in education disputes, drawing on his experience with Student Legal Services and his service on the Ann Arbor School Board from 1994 to 2000. A former UAW member, Roumel also heads his firm's union-side practice, representing trades workers to professional educators.

Roumel has represented numerous high-profile athletes and artists; victims of domestic and sexual violence; and students expelled for exercising constitutional rights. He has been appointed for various matters by courts, to act as a receiver for a corporation, and to mediate other cases. Roumel has also successfully represented criminal defendants for more than20 years, with an excellent record of obtaining favorable verdicts and dismissals.

Roumel practices throughout Michigan, staffing the Traverse City office on occasion, and even practicing in the Upper Peninsula. He is also licensed in his home state of Pennsylvania.

Roumel is an avid cook, authoring "May it Please the Palate" for Legal News throughout Michigan, and has written regularly for Michigan sports blog MGoBlog as "Counterpunt."